Burlington, North Carolina, is a charming town located in Guilford and Alamance counties. Before receiving its current name, it was called “Company Shops” during the 1850s due to its many repair facilities. When the repair facilities moved to Spencer in 1866, the city adopted its present name, and it was incorporated in 1893. Today Burlington has a population of over 53,000 residents.

Burlington is a pleasant city filled with awesome recreational facilities and historic features. Many homes in this community possess 20th-century architectural styles like Victorian and Colonial Revival as well as designs that date back to the 19th century. In the central business district, you’ll find the Depot, a building that was constructed during the mid-1800s. It’s a hub for outdoor concerts, meetings, and other events. If you’re a fan of baseball, then you’ll love to know that this town is home to minor league baseball team the Burlington Royals. You can watch the team’s games at Burlington Athletic Stadium. Burlington City Park is the city’s most popular park because of its old-fashioned rides, especially its restored Dentzel Carousel. The park also has walking trails, a playground, an amphitheater, and more. Feel free to shop until you drop at Holly Hill Mall. Holly Hill Mall contains over fifty eateries, shops, and entertainment establishments. The Alamance Battleground is where Regulators (farmers who opposed British policies) and Royal Governor Tryon’s troops fought each other in 1771. Today, it’s a restored area with a museum open to the public. Schools in Burlington include twenty public elementary schools, seven public middle schools, six public high schools, two charter schools, four private schools, and three career/technical schools.

Burlington real estate properties consist of apartments, townhomes, single-family dwellings, and mobile homes. These Burlington homes have an average of three bedrooms, and many of them were built during the years 1940-1969. Whether you’re raising children or retiring, you’ll like living in Burlington. It’s historic, charming, and great for families.

If you have questions about homes for sale in Burlington, North Carolina, don’t hesitate to contact us.

Nice 12 +/- acre parcel located in NE Alamance County with approximately an acre of cleared land and the rest wooded. Build your dream home and enjoy the country life!

Outstanding newly remodeled ranch ready to be your new home. This is affordable living at its best. This home boasts an open floor plan with luxurious hardwoods and custo...

Brick/Siding One story building that has most recently been used as a Church. Potential uses include a restaurant, daycare facility, commercial eqmt./vehicles sales cente... 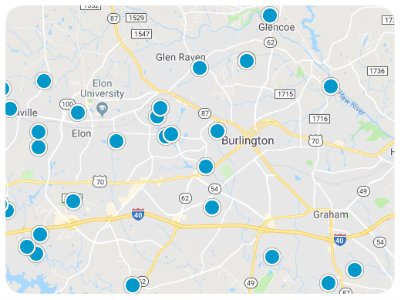